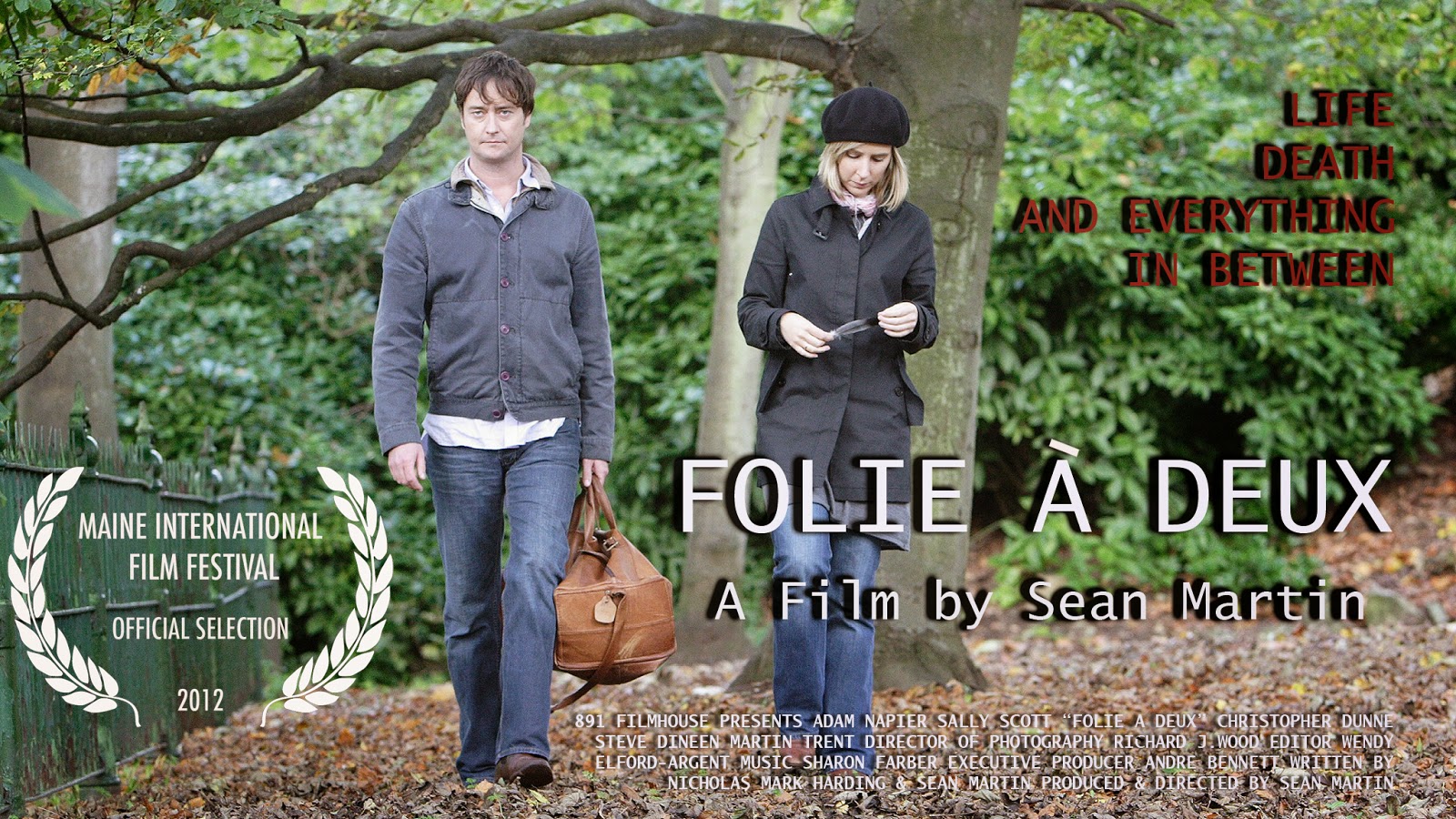 Folie à Deux is released today on IndieFlix. This is a better quality version of the film than previous online releases, and this is the one you should watch. Go here to watch the trailer and the film, or cut and paste this link into your browser:

Photo: David Hamnett.
Posted by Seán Martin at 12:58 No comments: 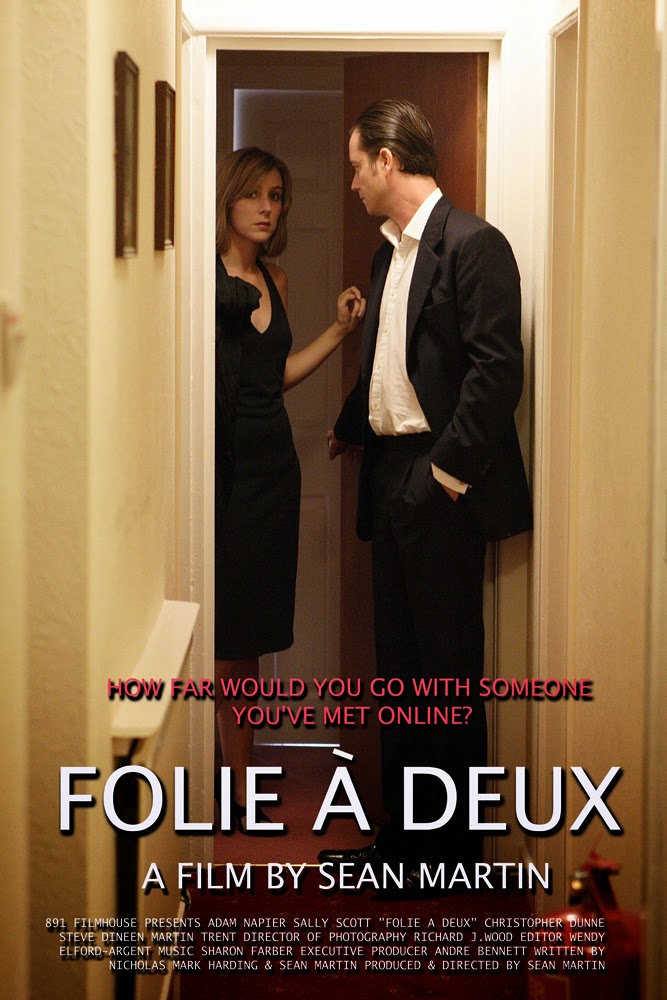 The World Première was last night, and I can happily report that it was a big success. We had a full house (almost) followed by a really good Q&A afterwards - half an hour of interesting questions and comments. People said they found the film moving, captivating, sensitive... all the things any filmmaker wants to hear, and I'm certainly no exception. The performances, music and photography also came in for praise. Heck, we even had a few psychiatrists in the audience! (I assume they weren't doing covert studies of filmmakers struggling to complete films.) The second screening will be this Saturday, 21 July. I will be there for that one - Sally has had to go back to Blighty. 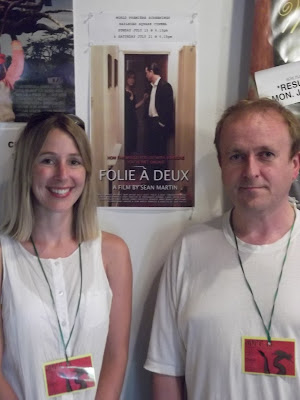 Leading lady Sally Scott and director Sean Martin at the Maine International Film Festival, Waterville, ME, at the weekend.
Posted by Seán Martin at 14:22 No comments:

Tickets for the July screenings in Maine are now on sale:


Folie à Deux will have its first public screenings at the Maine International Film Festival in July. The first screening will be on Sunday 15th July at 6:15pm and then again on Saturday, July 21 at 6:30pm, both at Railroad Square Cinema. Myself, your long-suffering director/producer/blogger, leading lady Sally Scott and producer Louise Milne will be at the first screening, where we will either introduce the film or give a short talk/Q&A afterwards. For the second screening, it will just be myself and Dr Milne. We're delighted to be taking the film to Maine - it's a great festival run by real film enthusiasts, and it's one of my favourite places. Louise and I will be at MIFF for the whole festival, which we're looking forward to enormously, and it's so nice that Sally will be joining us for the first screening. I'm reminded of that Grateful Dead line, "What a long strange trip it's been".

Over the last few days there as also been talk of previews in London and Edinburgh, probably in September/October. I'll post more details once I've spoken to a few cinemas in both places and see who can give us the best bar prices. Sorry! I meant to say screen hire charges...

Today I watched the master copy of the film all the way through, and it plays without a hitch. We now also have an uncompressed .mov. From these we can create - hopefully - a Blu-Ray of the film. As I have just found out, this is horrendously expensive, and was getting angry at the ridiculous quotes I was getting, until a saviour appeared in the form of a fellow Shooting People member, who has offered to do it for nothing. In order to do that, I now have to free up 700GB of space on an external drive...
Posted by Seán Martin at 18:36 No comments:

This afternoon we started making the master HD copy at the Screen Academy. Took longer than expected, as we had to get all 443.57GB of Folie off our WD drive and onto their system. We took the opportunity to correct a slight mistake in the film: at 13.58, Lucas (Adam Napier) looks up to the cafe clock. The time shows about 1357. 10 seconds later, he looks up again, and the clock now shows 1351 (ish). We had to change these over, but the trouble was, the two shots are not of equal length. This is unusual for Folie, where we have a rule of making all cutaways the same length - 5 seconds, quite long - so that we emphasize their role in the film not as cutaways but as memento moris. So what we did in the end was Alex had to extend a shot of Chris Dunne to cover the gap. Just about works. No doubt I'll mention this in the Director's Commentary once the film is out on DVD!

It was also a great pleasure to see the film in HD again, after several years of seeing it as a lo-res Avid offline. Christ, I hate Avid. I'm not an Apple fan-boy, but by heck, FCP7 seems like the promised land compared to Avid. (And no, I'm not tempted to try FCPX - if it ain't broke, don't fix it, as the saying goes.) We have made a great film, I think. I am always moved by the actors, and I hope that being moved by my own film is not the same as laughing at one's own jokes - i.e. that it really is moving, and not just me entertaining a few wishful ideas. (In fact, the only person I've ever seen laugh at their own jokes was Spike Milligan, and I think in his exalted case, he had every right: he was possibly the greatest comic genius of all time.)

Getting all the material onto the Screen Academy's system took all afternoon, so I'm back in there tomorrow to do the play-out to HDCam, and then we make the Blu-Ray and DVD copies. First in the queue is, of course, the Maine International Film Festival, who will be screening Folie in July. It will be the film's first public screenings. Can't wait. After all this time, our work is getting out there.