Yes, you read that aright - Folie à Deux is finished, at long last. We are doing the end credits in about half an hour, and then I'm going to burn a DVD, check that it works and then get it off to a film festival in the US. All that we have to do in January is make masters (on HDCam, probably) and possibly do a few sound tweaks, but, essentially, it's done. And once those things are taken care of, there will hopefully be preview screenings in London for cast, crew and creditors.

We've been discussing whether to do more ADR, or to trim the film, but we've decided that it should stay as it is - none of us can face any more tinkering on the fucker. Sorry, film. It's been far too long in the making, but has turned out better - and different - to the film that I originally intended to make. But that's how the cookie crumbles, usually: you have to make the best of the material you've got, rather than trying to force your material into being someting it frankly isn't and can never be.

There will of course be a long list of things to do in 2012: website, edit a trailer, festival submissions, previews. I've even considered writing a book - how to make a micro-budget feature film, experience far more difficulties than one originally envisaged, but somehow find ways to overcome them and come out the other side, if not smiling, then at least with a finished film that is good enough to show the world.
During the utter nightmare this film has been, I've also considered giving up, but as I've been writing this blog entry, I've just had a text from a producer asking me to pitch him a few ideas. And earlier this morning I had an email relating to what could be my next project, a documentary about the writer David Lindsay. (Another film, another blog...)

Anyway, I'd better work on my pitches for said producer, and then spend the p.m. making DVDs of Folie. When the trailer is up, probably in the New Year, I will blog again. Until then, have a very merry Yuletide and Hogmanay, and see you in 2012:-)

We have just set up a new Sponsume campaign to raise the final £500 needed to complete the mastering. More info on the link!
Folie a deux | Sponsume
Posted by Seán Martin at 12:18 No comments:

And Steve Dineen in... Oldham

In another so-late-it's-almost-not-worth-posting announcement to promote Folie's actors, Steve Dineen is appearing in a new production of Equus at the Oldham Coliseum. As with Sally's play, this ends tomorrow night (08.10.11.), so get your skates on if you fancy an evening in Oldham. More info and tickets here.
Posted by Seán Martin at 16:26 No comments:

Sally Scott on stage in Salisbury 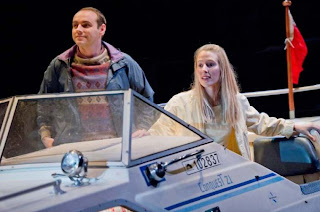 Sally Scott is appearing in a production of Alan Ayckbourn's Way Upstream at the Salisbury Playhouse. Reviews have been very good! The show ends tomorrow, so if you want to see our leading lady tread the boards, you'd better book a ticket straight away. More info here.
Posted by Seán Martin at 15:57 No comments:

The film is nearly finished

We've all had a fairly bad summer, for various reasons. Julien had his MacBook stolen, which had the closing credits song on it (amongst a lot of other music), while I've been trying to raise the remaining money. My luck was just about summed up by an old friend offering money to help us get the film finished... and then dying (not suicide, I hasten to add).

However, things are now looking up again. Money is on the way, no thanks to Sponsume and IndieGoGo, both of which have proved completely useless. Julien, Jake and I met on Friday to discuss final delivery, and I should be getting the files on Thursday. (Julien is re-recording the song in the week.) If no more remixing is required, then all we then have to do is marry the mixed sound onto the images, get our master copy made, and then probably promptly collapse into an emotional heap on the floor. Who'd have thought it would have taken this long, heh?
Posted by Seán Martin at 16:07 No comments:

We now have a campaign up and running on Sponsume to get Folie finished:

The amount now needed is only about £1,000, due to monies coming in, which I am very relieved about and can postpone my own suicide attempt. Please help if you can.

I would very much like to become risk averse once this project is done. I'm tired of taking risks. I'm tired of all my money - what there is of it - going into the black hole of filmmaking. I want to be... a lumberjack!
Posted by Seán Martin at 15:19 No comments:

At the suggestion of a fellow filmmaker, I have started a campaign on IndieGoGo to get the remaining money, as it seems I will now be a pauper for the forseeable future. You can read more and even donate here.

95% finished, and another funding crisis

The film is now almost finished, and it looks like we are about to fall at the last hurdle. Some investment I was expecting has suddenly not materialised, leaving us high and dry. We only actually need about £1400 (yes, fourteen hundred, not fourteen thousand) to get Folie finished and out there into the world at last. (A bit more would be helpful, to pay for marketing materials and film festival entry fees, to be honest.)

I had been expecting all of this to come from some documentary editing work I've been doing for a new age loony, but she has now announced that she is not going to pay me. Totally unbelievable. (I'm also on strike - that's the problem with rich amateurs - they have no conception of how much work is required to make a film, and think that it's a privelege to work for them.) So if anybody feels like going to the cash machine to help us out, please let me know. Right now, I'm going for a long walk.
Posted by Seán Martin at 10:53 No comments:

Yesterday, during one of the worst downpours I've ever seen in Edinburgh, we completed ADR with the inestimable Chris Dunne, who plays Ogilvy, the slightly mad, pyschogeographer priest in the film. As with all the other ADR sessions we've had, it was hard, finicky work, but it has improved the film immeasurably. Now ADR'd dialogue outweighs the original, live dialogue. I think if I had my way on the next film - if there is one - I would ADR everything. Anyway, I shall leave pipe dreams well alone for the time being, and get on with finishing the film at long last. The end is nigh.... or call me Harold Camping.
Posted by Seán Martin at 11:07 No comments:

The Joys of ADR

Yesterday we did ADR with Steve Dineen, who plays Paul, an itinerant tie-monger. OK, "Top Regional Sales Consultant, Southwestern Region". As with all ADR sessions - a few weeks ago with Adam Napier, today with Sally Scott - the pleasure of all this hard work is when the actors can contribute a slightly fuller intonation than in the original. It means that not only is the sound naturally greatly improved, but the emotional content of a scene is, too. You start to see your own script in a slightly different light, realising how even the simplest of words can carry hidden weight. Even the line quoted below! 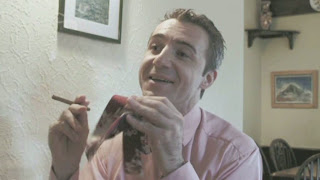 "We've got a website. Under construction. My tie's on the homepage!"
Posted by Seán Martin at 19:58 No comments:

ADR finally begins this week. We have about 15 pages of script to re-do with 4 actors, which isn't too bad. Hopefully it should all be done by the end of next month, cash flow permitting. I was greatly cheered today to read about how John Cassavetes made Faces. Basically, he plodded on, much as we have done. They had a lot of bad sound, and at one point he was advised to give up. But he didn't, even if it meant spending over 3 years in post. I knew his first film, Shadows, had taken a long time to make (well over two years, including a lot of reshooting and recutting), but I never knew about the problems Faces had. Just goes to show the old adage is true "quitters never win, winners never quit". Or maybe more realistically it should simply be "quitters never finish their films".
Posted by Seán Martin at 23:01 No comments:

Adam Napier in Dr Who

Our very own Adam Napier - Lucas from Folie - appears alongside Matt Smith et al in the new series of Dr Who, which begins this Saturday, 23 April. Adam appears as Captain Simmons in the first two episodes, "The Impossible Astronaut" and "The Day of the Moon" (broadcast on 30 April). More info can be found at the official Dr Who site.

Congrats to Adam - let's hope his character doesn't die horribly! Saturday is also St George's Day, so we shall be celebrating with morris dancing and copious real ales...
Posted by Seán Martin at 21:32 No comments:

Some good news at last - the mix and sound design are really coming together. At times the film is positively eerie. We are doing ADR next month finally and then we'll be ready to get it out to the sales agent and also to film festivals. More anon.
Posted by Seán Martin at 12:48 No comments:

It just went social.
Posted by Seán Martin at 18:04 No comments:

Our film "in the news" again

Another story in the news that seems sadly apposite to our film. Actually it was my Mother who brought this to my attention by sending me a clipping from the Daily Telegraph. Perhaps her way of reminding me that it's high time this film was finished. And here it is, brought to you by those nice morally upright bigots at the Daily Mail.
Posted by Seán Martin at 22:59 No comments:

Just noticed this on the Beeb website. Apt for this film, and also extremely sad:

** The stigma of Japan's suicide apartments**
Few in Japan will rent an apartment where a previous occupant committed suicide, so a death is frequently followed by a demand for money, reports the BBC's Roland Buerk.
< http://www.bbc.co.uk/go/em/fr/-/news/world-asia-pacific-12397216 >

** Disclaimer **
The BBC is getting far too right wing and is not responsible for the content of this e-mail, and anything written in this e-mail does not necessarily reflect the BBC's views or opinions. Sieg Heil!

Is the End in Sight?

I don't want to get ahead of things here, but we may at long last be close to finishing the film. Julien and Jake are working on the sound, recording foley and incidental music, and cleaning up the mysterious hiss that makes somes scenes sound like they were shot on a cross-channel ferry.

It amazes - and horrifies me, to be honest - that I started this blog five years ago, thinking the film would only take about eighteen months to make whilst we looked for cash to make The Gulf Breeze project. How wrong could we be? It's turned out a better film than I'd anticipated, but still, the endless delays have, I fear, had an adverse affect on me. I mean, do I really want to make another film? Do I want to go through this again? Wouldn't I be better off just throwing molotov cocktails at Tories and bankers? (Hang on, maybe that ought to be my next film...)