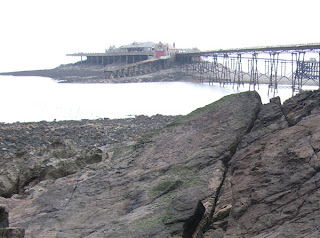 And this is the same rock the Beatles sat on, nearly 46 years later, taken yesterday after yet another depressing visit to the bank. Lack of money and absence: strange things.
Posted by Seán Martin at 10:56 No comments:

This is a bit OT, but as a Beatles fan and Weston historian, I thought I would post this link, which has plenty of Fabs-in-Weston photos, including one of those telescopes that you'll see in Folie... And if you scroll down, you'll see two home movie clips.
Posted by Seán Martin at 23:49 No comments: 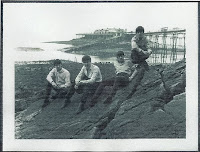 One of the locations we used in Folie has mysteriously burnt down. The Royal Pier Hotel in Weston-super-Mare, which appears at the end of the Chekhov scene, was gutted last night. It also appears in my short film Genius Loci, which was one of the episodes in Super-8 Cities. It's yet another Weston landmark to either be destroyed - as the Grand Pier was last summer, another fire - or let fall into decay - such as the nearby Birnbeck Pier, which is slowly falling into the sea. If Weston had a town council that had an ounce of imagination and moral fibre, these things wouldn't happen.

To go back to the fire at the Royal Pier Hotel, it sounds as though it was burnt down for the insurance, but the owners, who at one point were interested in investing in Folie, claim they don't have any insurance. The waters get murkier and murkier... It'll be interesting to see who they arrest.

The hotel is also part of music history: the gentlemen in the photo stayed at the Royal Pier Hotel when they played a week-long residency at the Odeon in Weston in 1963.
Posted by Seán Martin at 19:18 No comments:

The End is Nigh!

No, I don't mean the end of the world is at hand, although I'm pleased to see that capitalism and (British) democracy are in dire straits. (And I'm a bit concerned about the bees disappearing... maybe they're leaving the planet like the dolphins did in Hitchhiker's.)

The news is, of course, that we are now in the home stretch on Folie. Sound mixing begins in Edinburgh on 22nd June. We have had a two month enforced lay-off, as the facility we have been using has been totally booked up and, as we're dependent on their downtime, had no option but to wait. This initially felt like one more delay - a delay too far, at that - but I've been so busy with the book and Cannes, that two months have gone by in a blur.

We hope to have the sound done by the end of June, and we'll then export back to tape in early July. I'm still hoping that it will all hang together. From what I've seen so far, it looks good, but, as Bresson once said, 'You will never know if the mountain range of efforts you are putting into your film will be worth it.' And if Bresson didn't know how his films would turn out, there's not much hope for anyone else...

And in the news for parrotts: I've just set up a new blog, which will detail other projects, although Folie updates will continue to be posted here.
Posted by Seán Martin at 23:50 No comments: