I mentioned in my last post that it becomes very difficult to remain interested in your own work after a certain length of time. The original plan had been to get Folie finished by last summer, but that didn't happen due to the necessity of getting pick-ups, which was done piecemeal between June and November of last year (with a possible further day of pick-ups still to come). Varying degrees of soul-searching and questioning whether it really is worth dedicating one's life - or at least large portions of it - to making films, while not exactly slowly down the shooting of pick-ups, did at least mean that it was harder than ever to get back into the right mindset to get the film finished.

To that end, I've been trying in the last few weeks to seek inspiration via other means than various ancient country hostelries, and have renewed my Lovefilm.com membership. Almost the first two things I watched were Louis Malle's great 1963 film Le Feu Follet, and Fassbinder's In a Year With 13 Moons (1978). One could say Folie is tangentially related to both in terms of certain themes, while being stylistically very different. What interests me about both films is the use of dialogue, especially the main characters' attempts to articulate their feelings. Fassbinder makes great use of a tape recording at the end of 13 Moons, and this has led me back to thinking that short voice-overs could go into Folie, perhaps over the dream sequences.

On the subject of voice-over, I learned last week that Bresson's Mouchette was one of Bill Douglas's favourite films, and that contains no voice-over at all, so I may go back and watch that again, too. On the other hand, Diary of a Country Priest is a great voice-over film, so one could assume that Bresson had no particular aversion to it as a storytelling tool. My main feeling is that, if voice-overs are used, it would be to deepen the film and, if anything, make it more enigmatic, rather that explaining anything. There are very few explanations in our lives, and most of the time, we are adrift in a sea of seeming certainties, but which, on closer inspection, turn out to be as solid and long-lasting as a cobweb.

Another film that made an impression on me recently was The Assassination of Jesse James by the Coward Robert Ford, which I saw at one of my favourite cinemas, the Cameo in Edinburgh. Again, a voice-over film, and one with a voice-of-God narrator as well, which added a sense of inevitability about the whole thing, which I think suited the story. But perhaps the thing that struck me most was the sense that it was a film about the passing of time, and the briefness of meaningful moments, suggested by numerous shots of apparently inanimate objects - various domestic still lives, the sunlight on the floorboards, views through lace curtains or windows, etc. As any good filmmaker knows, there's no such thing as an inanimate object. Everything should play a part in your film; there is only inanimate writing, direction and acting. (To say nothing of inanimate distribution, criticism and overall cultural stagnation... but perhaps I'm going off on a tangent here. Or am I?)

How all this will feed into the last stage of Folie, I don't know, but it feels somehow like it is finally gelling. If I make another film after this, I'm tempted to take a leaf out of Fassbinder's book and do the whole thing from start to finish in 3 months. He averaged one feature every hundred days. No wonder the poor man died at 37. I'd quite like to survive a bit longer than that, Manoel de Oliveira being my main inspiration in this department, still making films in his 100th year. If there's one lesson to be learned from the Portuguese Master, it's this: whatever happens, keep going.
Posted by Seán Martin at 17:04 No comments:

We are now hopefully in the final stretch of post on Folie, after far too long in limbo, a limbo largely created by actor's schedules (unintentionally and unavoidably delaying the shooting of vital pick-ups) and the ever present spectre of a profound lack of cash. If the Gods of Post permit, we could screen the film in the Cannes Market in May, and hopefully finally get the film out into the world thereafter.

The main problem with being in post for so long is that it becomes very difficult to remain interested and inspired in one's own work, and the last few months have certainly been an object lesson in how to do so. I can't say I have any secrets, you just have to learn to watch something totally uncritically, and imagine that you are a member of the audience seeing it for the first time. Also to recall what got you excited about the story in the first place, excited/obsessed enough to get tangled up in the chaos and all-round assault course that is making a film.

The main artistic quandaries we have at the moment are deciding whether to add a bit of voice-over to the film, not to explain things, but to deepen the film, and also the vexed issue of music. I'm not sure that it needs very much, and seeing 4 Months, 3 Weeks and 2 Days on Saturday, which has no music at all, strengthens my feeling that less will probably be more. 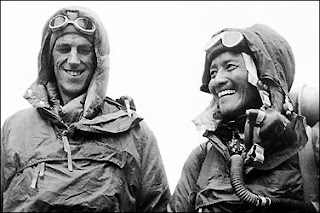 More film news anon, but at the moment I would just like to doff my hat to one of the greatest chaps of recent decades, Sir Edmund Hillary (L, here with the great Tenzing Norgay, just after the conquest of Everest in 1953). God Bless You Sir, and may we all learn from your example. (And have a quick single malt for Tenzing, too!)
Posted by Seán Martin at 01:10 No comments: